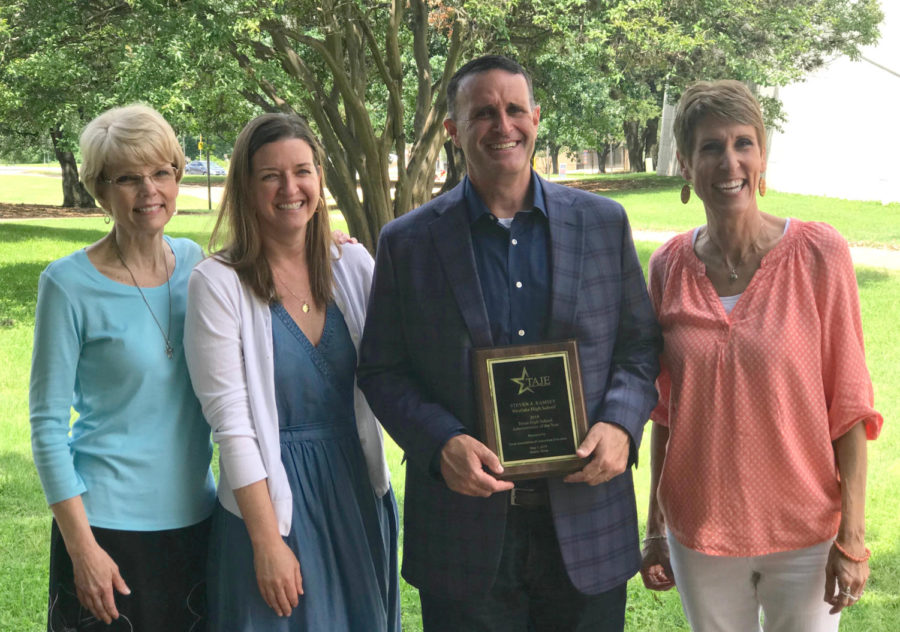 Westlake High School principal Steve Ramsey was honored by TAJE as its
Administrator of the Year during the ILPC Edith Fox King dinner on May 4
as well as during the Awards Ceremony on May 5. Westlake newsmagazine
adviser Deanne Brown, who nominated him along with yearbook adviser
Alison Strelitz, helped introduce and recognize Ramsey at the dinner. Her
words help convey why the awards committee chose Ramsey.

“It’s difficult to keep my comments about Steve concise and still convey the
scope of the positive impact he has had on our journalism programs,”
Brown said. “But I think by reading a bit from my letter of recommendation
and a student’s comments, you’ll understand why he deserved to be named
administrator of the year.

Recently, several of the Featherduster staff members were working on a
story regarding a sensitive issue at Westlake. At the heart of the controversy
was a tradition that has been practiced at every pep rally for the past 50
years—basically ever since the school opened—but which over time has
raised concerns about its potential racial insensitivity. Alumni especially
felt very strongly about this tradition and didn’t hold back on their social
media posts about what the administration should and shouldn’t do. The
Featherduster staff members had already visited with Steve about it and
gotten solid quotes and information, but there were still a few holes in the
story. Brown invited Steve to come by after school that day, a Friday, to visit with
the students and me for 10 minutes to get some clarity. Ultimately, he
stayed an hour and a half making sure all questions were answered and the kids had
what they needed to make sure the story was factually correct.

“Steve trusts the students to do their jobs to the best of their abilities — to
be fair, to be thorough, to be professional. He also trusts me to do my job.
He is there to offer suggestions, but he never censors work or tells the
students or me to do something one way or another,” Brown said.