Sam Ahmed is a senior at St. Mark's School of Texas in Dallas, Texas and the editor-in-chief of The ReMarker newspaper. 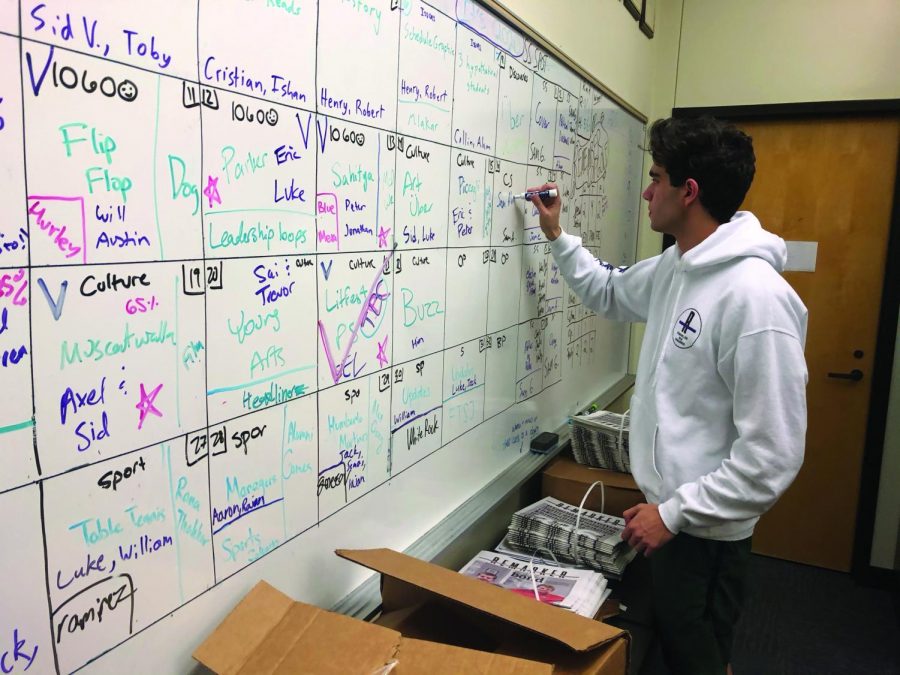 Outside of the newspaper, Sam Ahmed plays volleyball and runs the Chinese club. Next year, he will be attending Georgetown University in Washington, DC. Ahmed represents Texas as the state’s 2020 Journalist of the Year for the national JEA contest. 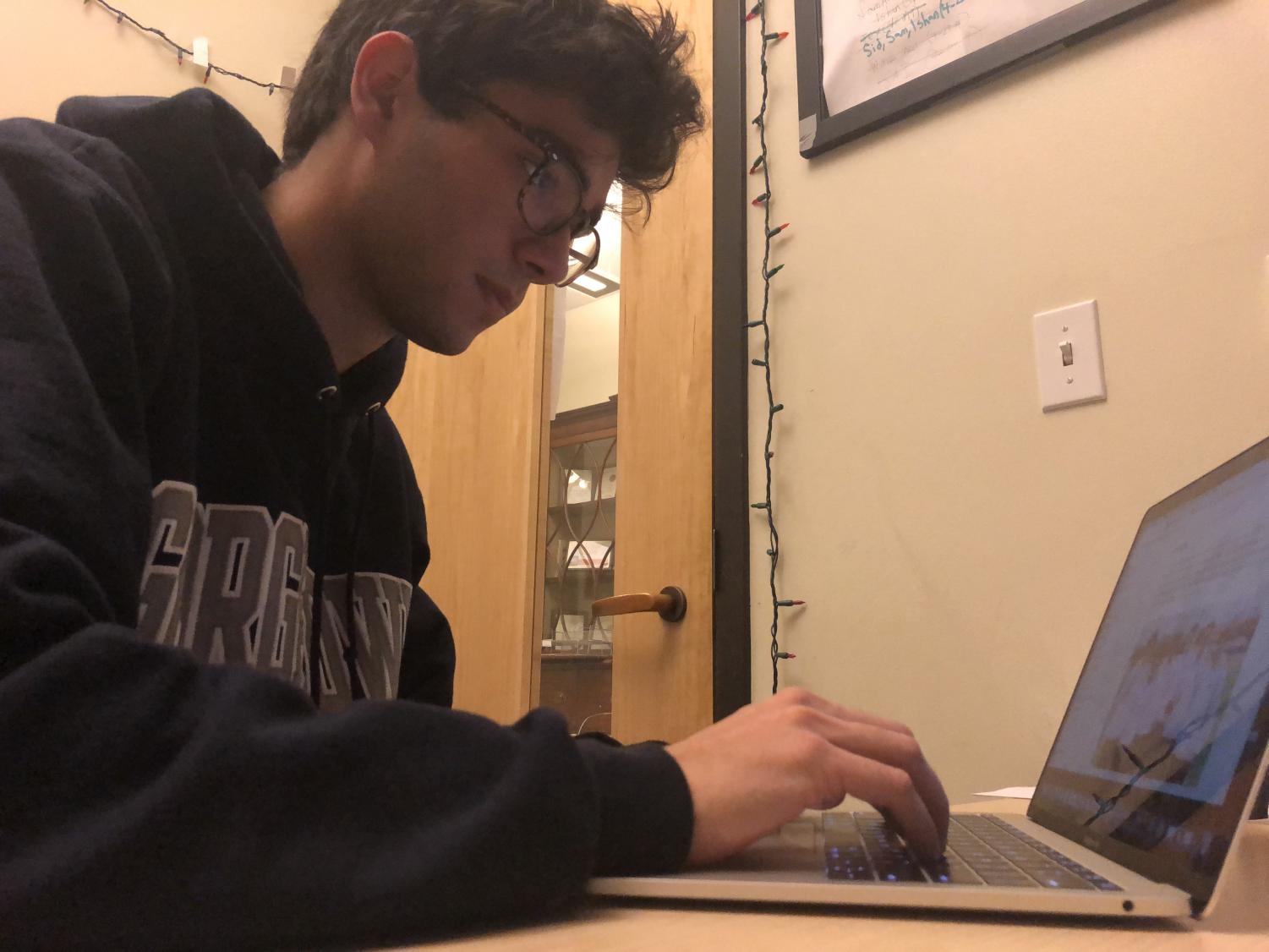 What project or story are you most proud of as a journalist and editor for The ReMarker?
I would say that there were really two stories/projects that really defined me this school year.

The first one was the November Special section we produced after our school and the Dallas community was hit by a tornado. We missed seven school days, and throughout all the chaos, we were still able to produce a 12-page special section dedicated to telling the stories of community members who were affected by the tornado, people helping out neighbors and how we were going to move forward as a community. To be able to put that out so quickly to document such an important point in St. Mark’s history was an incredible feat and one that I am proud to say that I led.

The second one was the cover story we did for our March issue. After hearing from some close friends about the little emphasis put on mental health on campus, I knew we had to bring light to the issue. And while writing the story, I wanted to write a column about my personal experiences with mental health struggles and really open up about my anxiety. As well as our diving deep into our coverage on mental health, we were able to write an editorial to urge administration to realize and recognize the severity of mental health issues on campus. At first, I was afraid that administrators were going to brush aside this issue, but they took the constructive criticism and have actively tried to improve resources and education on mental health for the future of St. Mark’s.

In both situations, I was able to establish my legacy as an editor for The ReMarker. I know now that once I come back in five, 15 or 25 years, that I will look back at those two particular instances, knowing that I really made a difference in the school community.

What challenges have you overcome in your life that have made you a better journalist and editor?
The most important thing that I have learned in my life that has made me a better journalist and editor is to always seek discomfort. In Middle School, I was always a shy kid who would always sit at the back of the classroom, but then, my seventh-grade teacher really pushed me to get out of my shell and take more risks in my life. Ever since then, I have always made sure to seek discomfort, and that’s how I ended up taking journalism freshman year. From that point on, I always have done things that have made me uncomfortable in order to become not only a better journalist and editor but a better person. For example, I had the opportunity to attend an NBA shootaround and game recently, and I was petrified to ask NBA players some questions. But I remembered what my 7th grade teacher told me, and I decided to take some risks that night. After we left the arena, I had interviewed seven different NBA players from the Memphis Grizzlies and had the opportunity to be a part of the post-game media conference.
I’m still doing things that get me out of my comfort zone, but that definitely has been the hardest thing to overcome in my life that has made me a better person and also helped me as a journalist and editor.

What role has the student media program played in shaping your life?
I wouldn’t be even close to the person I am today without working in the journalism program at St. Mark’s. My time in the Publications Suite has taught me real life lessons and invaluable leadership skills that most 18-year-old teenagers don’t get to experience too often. I have learned how to deal with real deadlines and problem solve every day. Overseeing and working with about 60 people from writers to designers to photographers, it has truly been a monumental task every cycle to produce the content that we do. Being able to lead the publication this year, I have pushed myself every day to make sure I am setting the tone and example for the whole staff to follow. Working on staff has taught me more life lessons than any class ever will, and I’m so glad I made the decision to be in the program.

What advice can you offer to young journalists who want to make an impact in their schools?
I am grateful for the amount of support we receive from the administration, but I understand that not every school has that opportunity. For young journalists who want to make an impact, I would say to always keep pushing the envelope on what you can cover and never give up on something you are passionate about. Even if your school’s administration might push back, I think that the most important thing for you to do is to never give up on a story before you start. If you believe it is a powerful and necessary story to tell, then, make sure you make that clear. One thing that has helped me is to have a strong relationship with my administration to start an open dialogue between students and administrators as often as possible. I would also say that you need to be prepared to fail sometimes, but as long as you can present a story with powerful sources and a reason to publish a story, that is all you can do at the end of the day. I would emphasize that student journalists have possibly the most important job across school campuses to be an outlet for student voices, so make sure to take full advantage of that.

Ray Westbrook is the publications adviser at St. Mark’s School of Texas in Dallas.

Describe what it’s like to work with Sam as a journalist and editor for The ReMarker.
I learned early on that Sam’s judgment is sterling, so when he proposes a story or suggests that we should be sensitive to the Lower School boys (as in a cover story which told of a date rape), I listen to him. His instincts are mature and well-thought out. I was a bit questioning of a cover story he proposed on “mental health issues” — but the coverage package he produced was one of the most talked about in my 19 years at St. Mark’s. His personal column, which admitted some struggles, is one of the most powerful pieces we’ve ever run. The headmaster even opened a Board of Trustees meeting with remarks about Sam’s column.

Quite simply, Sam gets things done — but not in a loud, boisterous, chaotic way. He’s the steady, deliberate, “cover all the bases” kind of guy. As editor, Sam has been extremely organized and an amazing communicator, using social media and classroom time to clearly set out expectations, story angles, deadlines, workflow and objectives.

He’s also been quite adept at mobilizing the staff to cover two unexpected crises: the Oct. 20 tornado that hit campus and the current Cover-19 pandemic. In both of these situations, Sam, working with his senior leadership team, planned a complete story slate, worked with both our photography team and art team and assembled an exhaustive coverage package…even before speaking to me. That is leadership, and because Sam’s judgment is mature and spot on, all I had to do was review his plans.

What kind of qualities in a student do you value as a student media adviser? How do you see those in Sam?
When I am considering students for editor-in-chief (boys must submit a letter of application, along with goals and ambitions for the year), the first thing I consider is trustworthiness. If I feel I can’t trust a student implicitly, he doesn’t even merit consideration. I also consider two other prime components:

(1) Since the editor works closely with our headmaster (twice-monthly meetings) I try to envision how comfortable a boy will be when he’s sitting across the headmaster’s desk, discussing upcoming story possibilities and coverage packages. I want someone who will not be intimidated by our school head but, rather, will be able to engage in meaningful conversations.

(2) I also consider if the student will be able to “rally the troops.” By that I mean, will the rest of the staff follow his lead and be confident in the direction they are being given, especially as it relates to deadline completion and, ultimately, completing all the pages so they are complete and correct to ship for printing.

On all three of these evaluative components, Sam has been a 20 on a ten-scale. I could go on and on about what an incredible year this has been with him at the helm, but the examples I’ve already stated should certainly suggest that.

What do you do to cultivate a culture of leadership and accountability in your student media programs?
The best thing to do is give the reins of leadership and decision-making to the students. There’s an old saying: “People tend to support that which they themselves create.” I’ve embraced that tenet in building the program at St. Mark’s. My editor-in-chiefs through the years know that they run the show. I’m there for advice and “gentle steering,” but most major decisions (from personnel to coverage to financial operations to visual components) are made by the editor and his team. The boys know I will support them; I’m also pleased they do seek me out for conversations, opinions and counsel frequently.

What advice can you offer to young advisers trying to develop a robust program that produces quality journalism?
The first thing that comes to mind is to erase the thought that the students are “student journalists.” Rather, my boys know they are journalists…who just happen to be high school students.

We set very high expectations at St. Mark’s — the finished product should be equal to professional counterparts. Because my boys take their work seriously and are not afraid to present issue-driven stories that engage our community, we have incredible support from all administrators, from the headmaster on down. I never let my students view the administration as adversaries. Instead, we partner with them to provide meaningful stories for our community. When your administrators appreciate and support the work you do, great things can happen.

If I’m giving advice to a young adviser, I would encourage her or him to concentrate on issue-driven, in-depth stories about real concerns of the community. Sure, we cover club news, major events that happen annually, but when you talk about issues that affect your audience (mental health issues, new curriculum or scheduling formats, school violence, the me-too movement, and the like) you’ll find that your newspapers are actually read.