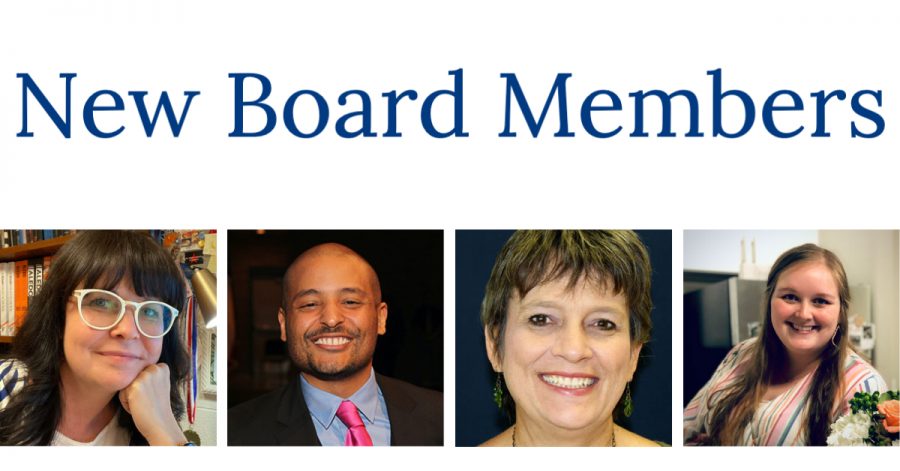 TAJE is pleased to welcome several new board members. We are eager to plan our first in-person convention in a post-pandemic world and feel confident that these are the right individuals to help TAJE support Texas advisers through this next year.
Emily Arnold – State Director

Emily Pyeatt Arnold began advising student media at Haltom High School and currently advises the Ledoian yearbook, the Cat’s Eye online news site and Catalyst literary arts magazine at Aledo High School. Her passion for storytelling began in her own high school photography, journalism, English, theatre and speech classes. She attended the University of Nebraska where she worked for The Daily Nebraskan and graduated with a bachelor’s in film studies. Pyeatt Arnold also earned her master’s in liberal arts from Texas Christian University. She is a former JEA Rising Star.

Mr. Pedro Cabrera, M.A., CJE is the publications adviser at Judson High School in Converse, TX. He advises The Fuel student newspaper, as well as the school yearbook, The Rocket. Born and raised on the west side of San Antonio, Cabrera is the child of two Dominican immigrants. He graduated from Oliver Wendell Holmes in 2006 and attended Texas State University. He graduated with a BA in Communication Studies in 2011 and went to teach for two years in the Aldine Independent School District in Houston. He graduated with his Masters of Arts in Communication Studies from Sam Houston State University in December of 2015. He is currently working on his Doctor of Education degree in Educational Leadership from Walden University. Not only is he an adviser, but he is also an adjunct professor of speech communication with Alamo Colleges. He is an avid biker and lover of all things Whataburger.

Margaret Edmonson, CJE, advises student publications at Smithson Valley High School, where she has taught since 2006. Previously, she taught journalism and advised publications at Burbank High School in south San Antonio. Her staffs’ yearbooks and websites have earned Star awards from ILPC,  All-American recognition from the National Scholastic Press Association, and inclusion in the Jostens LookBook. Before she entered the classroom, she spent 15 years working as a reporter and editor at daily newspapers in Kerrville and New Braunfels.

Mauri Sparks will be joining TAJE as our new Digital Communications Specialist. After being on her high school yearbook staff for two years in Queen City, she started working for her university yearbook, the Ouachitonian, where she became Editor-in-Chief her junior year. After graduating from Ouachita Baptist University in 2014 with a B.A. in Mass Communications, she worked in marketing for a few years. She felt the call to teach (something she vowed she would never do as a child of teachers) after seeing an open yearbook position near her hometown of Texarkana. After teaching at New Boston High School for three years, she decided to move to Austin where she now teaches graphic design and advises The Comet yearbook at Austin High. Yearbook continues to be her passion, and she enjoys getting to watch that passion bloom in her students.